Well, it’s been a long and interesting year-plus-a-bit, but now I am back to work here in the barn for what looks to be a pretty good stretch of somewhat interesting work.  To that end, I have spent some time recently working on a project that is admittedly an exercise in pure indulgence.  Its roots lie in both my wood scrap pile and my experiences last summer helping out over at the furniture school across town.

For those of us who feel compelled to make things, there is a big question we must answer, either sooner or later.  Does our satisfaction lie in the product or in the process.  I’m pretty sure that neither is more noble, nor that they are mutually exclusive; but I am equally sure that each of us identifies more with one than the other, and I am definitely more about the process.

Of course, I can set out to make a purposeful object, and I can enjoy making it and take pride in my product.  It is a lot like taking a planned trip.  There may be detours, and there will surely be interesting and even unexpected things to see and do along the way, but, in the end, you reach your goal and feel a sense of accomplishment.  I am currently getting ready to build a king sized bed frame from some cherry.  And I am looking forward to it.  But there are some very proscribed parameters.  The size, of course, but also the style, which must play nicely with a bunch of existing furniture.  I plan to get the stock and rough plane it in the next few weeks.  Then, after Julie and I return from our upcoming trip around the Baltic, I will get to work.

But back to my recent indulgence.  About a month ago I came out here to the barn determined to tackle my scrap pile.  I have a tough time throwing away even the smallest piece of wood, but the stack(s- let’s be honest) was (were) impinging on my work space and threatening to topple and spill.  I set a goal of turning at least two thirds of it into stove wood.  And I succeeded.  But among the reprieved were a seemingly disparate few that kept catching my eye: a busy looking piece of 6/4 maple, about 8 inches wide and maybe seven feet long, with an interesting “live edge” feature along one side; an very resinous pine board that I saved out of an old (early 19th century, I believe) wardrobe that had outlived any usefulness; and some cedar scraps, left over from a series of canoes I built a few years ago.  I set them aside and finished my shop chores.

A few days later I started messing with this odd collection.  I jointed and planed and squared things up.  Next, I cut a strip (the live edge part) off the maple, then sectioned and resawed the remainder, resulting in four pairs of half inch by six inch boards.  Then I made a drawer out of some of the cedar and a piece of the pine.  Lastly, I dug out a set of hinges that had been kicking around on my bench for a couple of years. 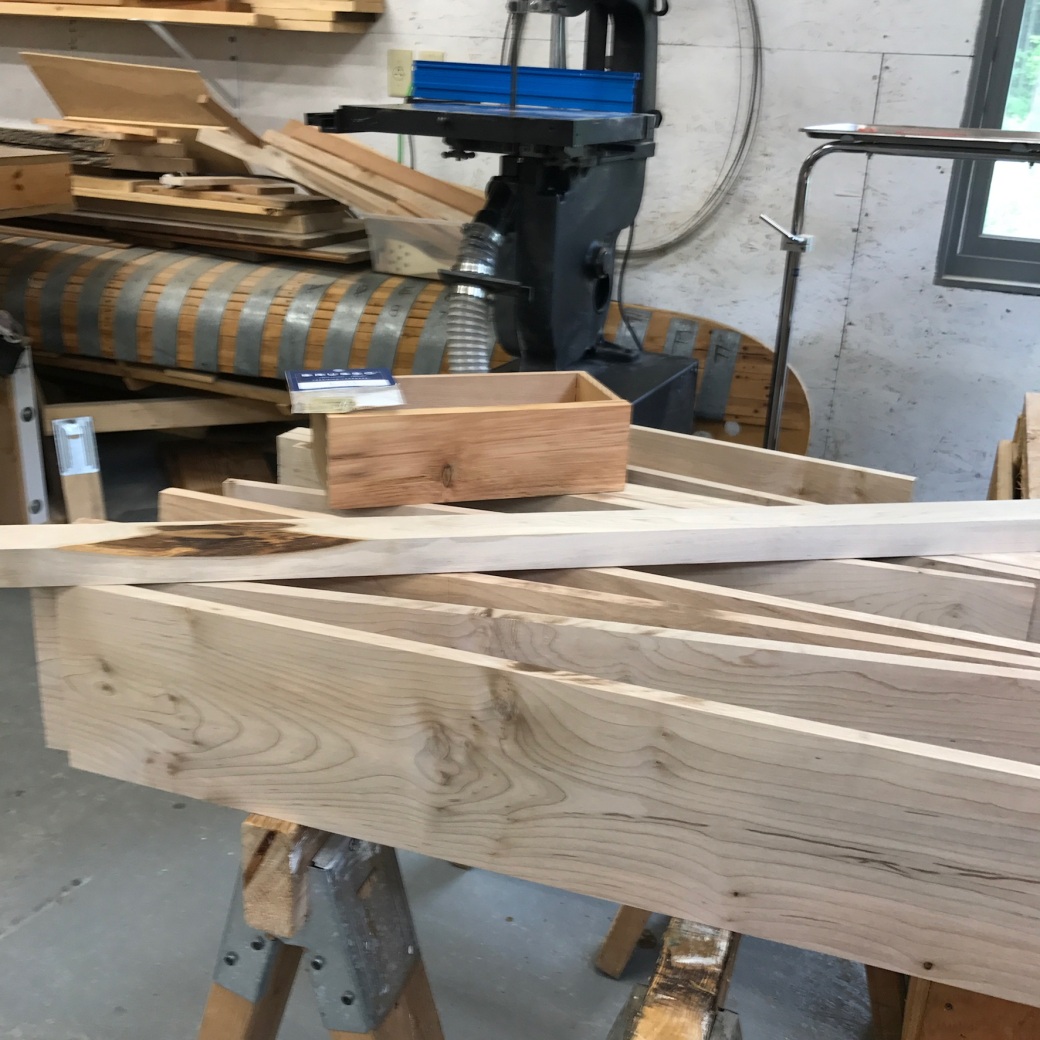 The best part about my time at CFC last summer was to get to work alongside Adrian Ferrazutti.  Adrian is smart and talented and has a good sense of balance in his approach to making things.  He knows how to be serious enough about the work, without being too serious about the work (or himself.)  He is also curious and likes to try things, not worried about “success” so much as seeing what will happen.  I found his true open-mindedness to be refreshing, especially in a setting that can sometimes be fraught with, well, let’s just say fraught with the opposite of all of that.

Anyway, Adrian was fortunate to have studied out at College of the Redwoods back when Jim Krenov was not only still alive, but still making cabinets.  Hearing Adrian talk a bit about that experience got me interested.  I had heard of Krenov before, but didn’t really know too much about him.  I got a hold of one of his books, A Cabinetmaker’s Notebook, and found it kind of interesting.  I especially liked his idea of “composing” his work and letting the wood find its own way to a certain extent.

It was in this spirit that I took those maple boards and “composed” a carcase for the drawer I had built.

In keeping with the simple feel of the project, I decided to use only butcher wax on the maple, and beeswax in mineral oil on the softwoods.  I got the facings figured out, did a bit of edge shaping,  and, a few days later, hung the door and installed some stops made from a little piece of walnut that had survived the recent purge.  My friend George the Potter stopped by and I showed it to him.  He admired the use of the wood, complimented my craftsmanship, and then asked me what it was for,  what was I going to put in it?  He immediately got embarrassed and apologized for asking just that question he so resented when directed at his own work.  I laughed and enjoyed his discomfort, but it got me thinking. 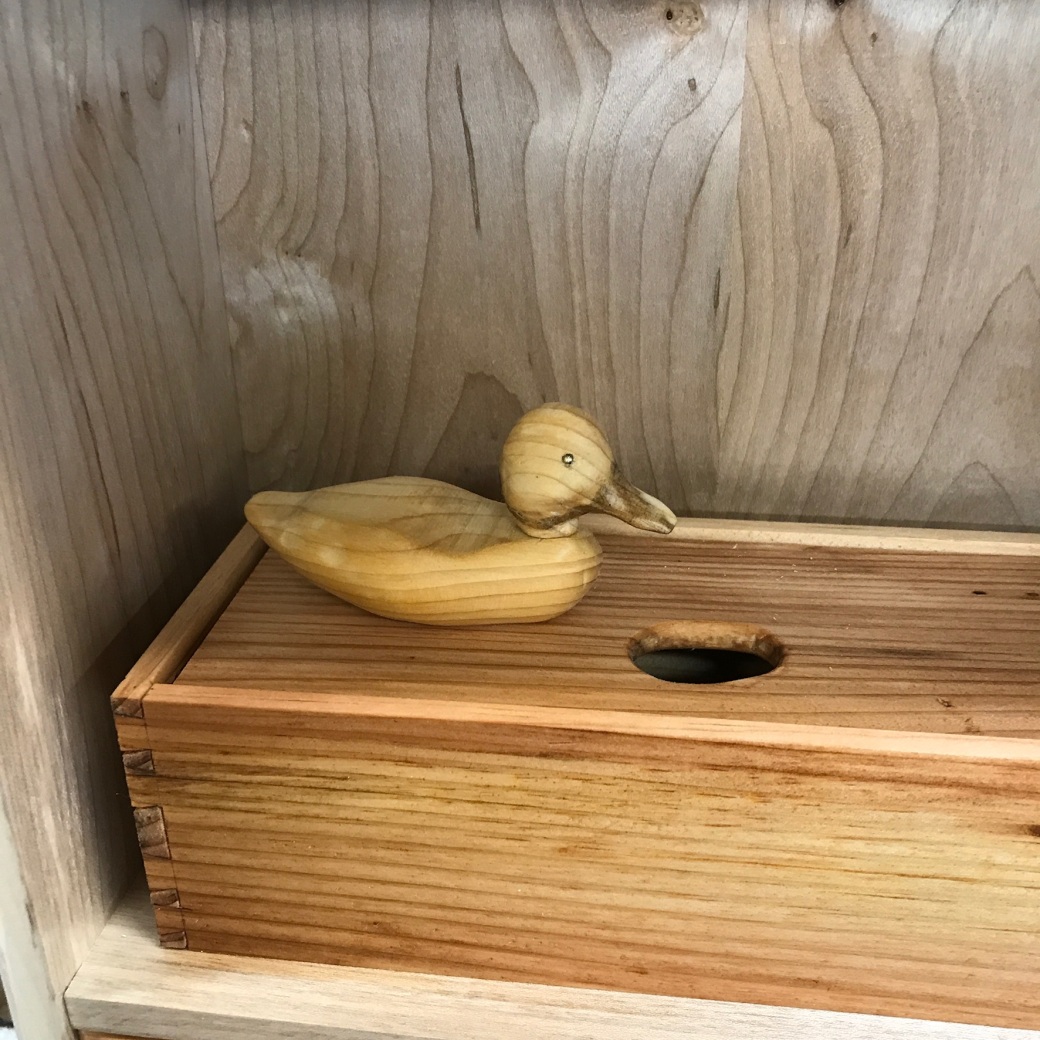 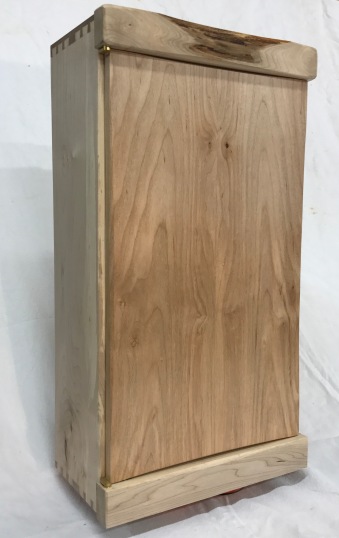 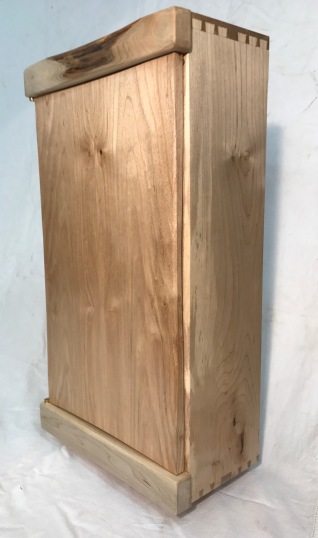 And so I present: a small cabinet with a drawer, a box, and two ducks; a composition in  maple, pine, cedar, walnut, brass, butcher wax, and beeswax in mineral oil.  Making this was, as I have said, a pure indulgence.  Hopefully, I will get to do more things like this between my more product-based projects.