The title of this post should probably be “the past couple of weeks in the barn, out in the yard and down at the harbor.”  The doped canoe hulls are curing- they are almost halfway there.  Meanwhile, a full-blown spring has overtaken us in a way I haven’t seen in a few years.  Fairly warm, dryish air and not too much (some might even say too little) rain have led to good progress getting the boats ready for summer, as well as allowing for lots of yard work that I had thought wouldn’t happen until summer.

I have managed to squeeze in some work in the barn, though.  I made this shaving horse out of a piece of maple I had kicking around.  The design is based on a few I had seen on-line.  I still need to fashion na foot peddle, but it works quite well and will make shaping paddles a lot easier.  The work support surface is adjustable by the bungee-loaded pawl and the ratcheted post.  The clamp bar can also be set to different positions.  And the seat slides forward and back to allow proper address of the work. 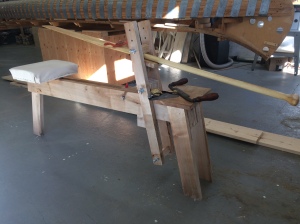 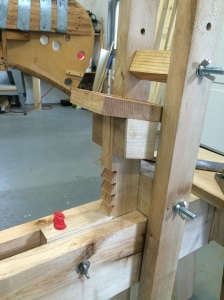 In the yard, the big project (done by Ken Thompson/Beech Hill Landscape) was the (you can’t see it) huge french drain across the entire fron yard, which was then loamed, graded and seeded.  Hopefully it will be a nice, well drained, grassy yard soon.  A smaller job was the construction of two four by twelve by twenty-two inch high raised beds for our vegetable garden.  Seven yards of loam, manure and peat are due Thursday, and then we will be ready to put in the peas and radishes and all.  Next year, we can start earlier, as I will build cold frames above the beds.

The yacht club launch went in the water today, and,  after replacing the completely dead battery, I took it across the harbor to its dock.  Preamble is probably not going in until the middle of June.  Meanwhile, I have a bunch of teak to sand and refinish, as well as a few rigging chores, and, of course, bottom paint and wax.

Once all of these chores are done (and the canoe hulls are cured,) it will be back to more interesting things in the barn.  Rails, outer stems and keels to be fit.  Varnish on the insides and rails, paint on the hulls, and more paddles (and some different shapes) to be carved.

The dogs and Rachel had some nice pictures done by 5IVELEAF Photography, out in Appleton- a Mother’s Day present for Julie.